Just as markets rise and decline in an often unexpected manner, so too, does trading performance. Traders experience personal highs and lows, and although both experienced and novice traders know that this is how trading works, not everyone is skilled at handling the lows.  This makes sense, as all our life people are trained to win. No one likes to lose and feel these lows. Because of this, no one is ever trained to lose. Yet, in trading, losing is a reality that all traders will have to deal with. In addition to being trained to win, traders have to be trained how to lose. This article will do just that; it will train you how to lose well, and protect your trades in the process.

Once trading performance goes into a downward spiral, it’s not easy to get a reversal. A large factor of this stems from a mental block. From a neuropsychology standpoint, this can be explained chemically.  Under stress, a person’s production of cortisol increases, slowly rendering them weak, timid, anxious and risk-averse. It is this excessive cortisol production that makes one more likely to base their decision making on fear, anxiety and exaggerated the perception of danger, all of which are traits that are ineffective to trading as they result in impulsive decisions, overtrading, or avoidance of trading.

Similarly, from an emotional standpoint, consecutive trading losses not only results in a loss of money, but also  in a loss of trading confidence and a shift in the trading mindset. For novice traders this can be extremely dangerous for their trading abilities. Instead of making informed and educated decisions on the markets, traders shift to a mindset of “getting back what they lost” as quickly as they can. This mindset causes traders to get back into the market right after a loss. Typically, this means that these subsequent trades are emotionally based, which is always a bad idea. Little or no thought is given to the technical, fundamental, or informed analysis that successful trades must be based upon. This emotion biased trading is the reason is why traders use automatic analysis tools such as BetterTrader.co .

Many novices try to combat trading losses by increasing the position size of each subsequent trade. However, this action will only accelerate your trading losses in exponential amounts. Put simply, this approach a form of gambling, is prone to eventual disaster. Gamblers and traders with this mindset use a strategy called martingale, that involves doubling your risk after each loss to recover your whole loss. Although some traders have found initial success using this strategy, it is destined to fail in the long term.

One should never increase their risk per trade to recover losses.

To use as a frame of reference, on average, a proprietary trader usually earns between 100-200% in a good year. This means, for one who trades 10% of their starting balance and faces 10 consecutive losses, will best case require a full year to recover from one sequence of losses.

Statistically, more traders fail due to lack of educated money management than any other singular cause. Moreover, unpreparedness for consecutive loss makes up 90% of the reason why traders blow their accounts. This is mathematical proof that one should be risking less money in each trade. Risk and loss are guaranteed in trading and as a result, traders should never make an exception to this rule. 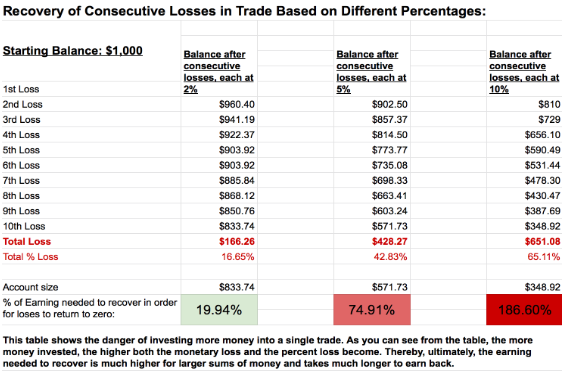 In trading, it is crucially important to recognize a state of mind that could lead to impulsive uninformed trading decisions, and one must take action to prevent themselves from doing further damage.

Pro traders take this time to revert to investing the smallest amount of money that will not affect their trading for a period. This not only removes the stress of losing money, but also allows the trader to gain back their much-needed confidence when they see that they can in fact, gain money.

In times of consecutive losses, pro traders have the psychological discipline “walk away” from the market. In addition, pro traders, reduce their trading to the smallest amount (one contract) for a time period until they resync with the market and their confidence begins to build again. Only then do they increase to the regular trade size. In order for one to stay in the trading game both as a novice or as a professional, it is critical they understand that risk and consecutive losses are certain. Every trader will find themselves in this situation, the question is how did they prepare for it? Consecutive loss is the pitfall that failed traders don’t see. This is why it is pivotal that traders prepare well for the ultimate day when they face consecutive losses.

In conclusion, despite consecutive trade losses,  if one manages to keep their emotions disciplines and is able to manage their money properly, they should have no problem surviving a string of bad trades – especially if their winners are larger than their losers on average. Keeping one’s self from losing confidence and making emotion-based trading decisions is crucial in successful trading. After all, mistakes and losses are an aspect of trading but so long as a novice trader remembers that they need to survive in order to be successful, and survival is based on managing their money well, consecutive trading losses will ultimately not have much effect in the long run.

To summarize, when facing consecutive losses: