Divergence in Trading: How to Profit against the human logic

When it comes to markets, past performance is no guarantee of future results. There are constantly unexpected events that may lead to significant movements in the market, but a successful trader can learn how to turn these market movements into substantial gains. The first step in obtaining these substantial gains is understanding divergence.

According to Investopedia, divergence is when the price of an asset moves in the opposite direction of a technical indicator, such as an oscillator, or moves contrary to other data. Divergence signals that the current price trend may be weakening and in some cases may lead to the price changing direction.

Some traders try to take advantage of divergence even though they do not know exactly when this ‘flip’ (return to normal) is going to occur. Making this assumption that divergence is returning to normal mode is difficult to predict, which if wrong can result in major losses, so let’s look at an example from the oil market.

The main idea of emerging divergence

Assume that the market is following its current trending direction. Everyone who sees this trend adheres to it so that they can profit. However, this strategy only works until the market begins to slow down and exhibit strange behavior. During this time traders believe it is best to reverse their position and fight the “logic” that makes them want to maintain their original practice. As more traders take on the reverse position it causes a cycle where even more traders open new (very logical) positions.

Profiting off of divergence

If a trader notices strange behavior in the market (a possible signal of divergence) early on then the trader has a great opportunity to make a profit. This means that when the price breaks its resistance level most people will short that market because they believe that it will return back to the normal range and allow them to make a larger profit. However, when the price continues to go up these traders will have to close their positions to prevent sizable loss which creates a demand for that market and causes a greater increase in price. This cycle continues and the price continues to rise.

Here is a graph that compares the price of US oil to UK oil over a ten year period. 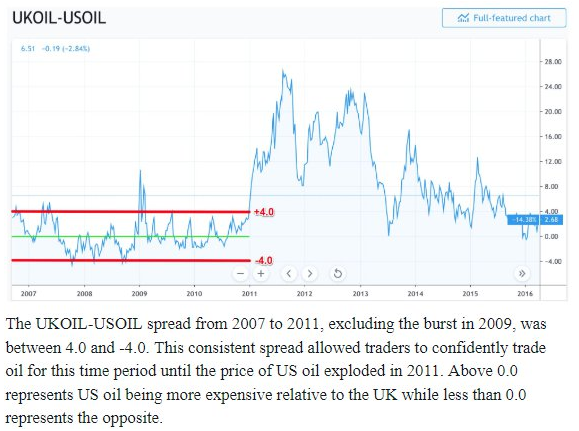 These traders are used to the spread that the commodity is traded between, thus they will continue to take the opposite position depending on how the market is moving.

Don’t fight what has worked in the past

What happened in 2011 and over the next few years no one could have predicted. The spread shot up and was constantly reaching historic highs. It went to a 5 point spread to 6 to 7 and eventually hitting as high as 26. Analysts continually said that it was as high as it was going to get and that it could not go any higher, so people bet that this spread had finally reached its peak and shorting the spread. However, each time the spread went higher people were forced to close their positions in fear of losing more than they had already lost. This reaction pushed the spread even higher.

People found themselves trying to fight what had worked in the past. They tried to use this past logic and reasoning to explain the future, but sometimes a good trader has to go against what seems logical. Adam Robinson, entrepreneur, systems builder, and wizard of global financial markets made a good point on the podcast “The Knowledge Project.” There he explained that when the market is exhibiting strange behavior, people believe they have found a newly profitable market to trade in. The reason traders think the market has become more profitable is because they believe that most Essentially, traders think that because the market is going up it can’t possibly keep going up and other traders have not noticed that yet. That is not true and forces people to close their positions allowing the ones that rode the wave to make significant gains. It pushes the market to limits no one thought it could reach before.

“Sometimes a good trader has to go against what seems logical.”

Divergence is unexpected and can even lead to devastation, but if you don’t fall into it then it could be a very good opportunity. Many traders lose large chunks of their account largely to their stubbornness. Don’t be one of those people. Learn how to take advantage of divergence and learn how to ride the wave. It’s easier to go with the current than against it.

How To Not Trade With Directional Bias