The Elliott Wave Theory was crafted in the 1930s by Ralph Nelson Elliott. The theory asserts that although the stock markets tend to often act in a random and pragmatic nature, there are predictable market trends that must be assessed for the enterprising investor.

Elliott wave theory differs from the Dow theory in that the Elliott theory breaks markets down into fractal patterns. Fractals are mathematical structures which infinitely repeat themselves on a micro-scale. These repetitive fractals can also be observed in market index patterns, and these patterns can be used as predictive indicators of future stock market moves.

There are many stock market predictions that can be made base don the interpretations of wave patterns. The basic movements of the theory consist of impulse waves and corrective waves. Impulse waves consist of five sub-waves and travel in the same direction as the larger overall trend. Oppositely, a corrective wave moves in the reverse direction of the main trend. It also consists of five smaller waves that make up the overall wave pattern.

The 5-3 move is a common market movement that exhibits the Elliott Wave Theory. In this 5-3 trend, 5 waves follow the direction of the main trend, followed by 3 corrective moves. 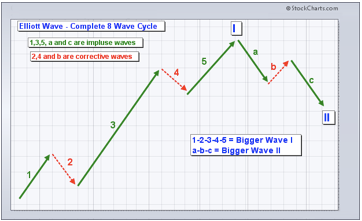 The Types of Waves:

In the Elliott Wave Theory, there are nine types of waves of varying degrees. They consist of, from smallest to largest:

There is a clear difference between correlation and causation. Market movements can be correlated to psychological factors, however, there is not a direct link between the two. Just because movements can be indicative of future security prices does not mean that traders should believe they can predict these prices to a science. Traders using this theory should always remain up-to-date in the current market and world news, as well as developments within the security that they are following.