13 Major Economic Events Any US Trader Needs to Watch

Posted by BetterTrader.co on September 21, 2017 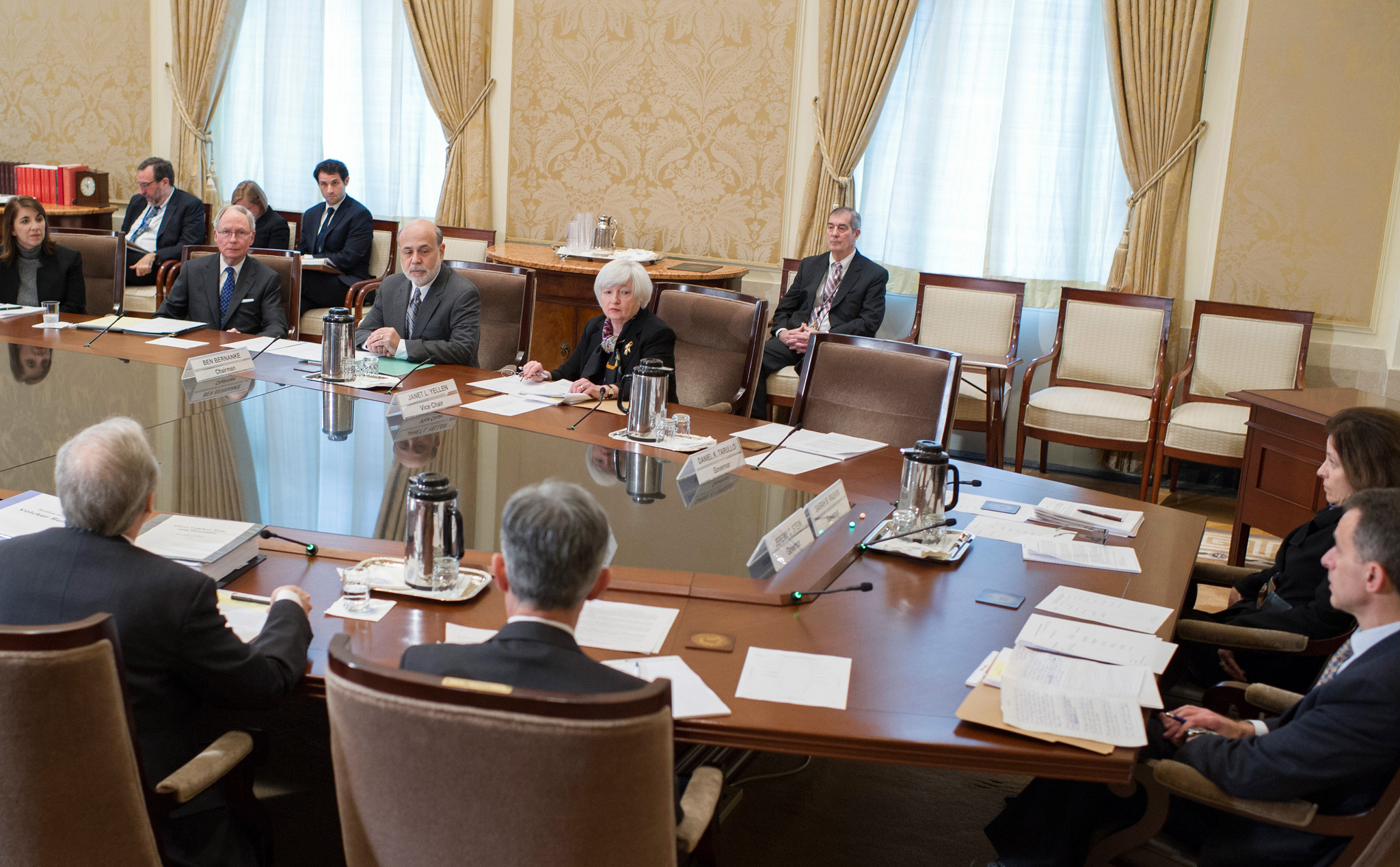 for US Traders | economic calendar

This post presents a list of the top thirteen major economic events in US markets. These events will undoubtedly impact the markets strongly when actual results differ from what the market was expecting.

Economic releases do not matter as much when looked at in isolation. It’s all about how surprising – whether positive or negative – the actual result is when compared to expectations. The market reacts to new information, and it’s important to keep both the expected and the actual result of an event in mind when analyzing it. 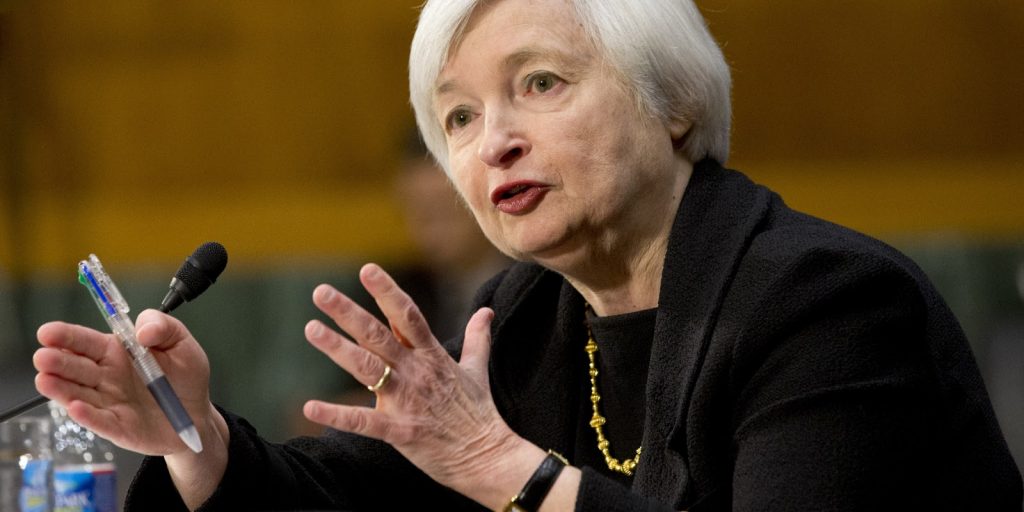 The Gross Domestic Product is another one of the major economic events. GDP is the primary indicator used in gauging the overall health of an economy and has a large impact on trading. It represents the total dollar value of all goods and services produced over a specific time period.

A healthy economy leads to decreasing unemployment and increasing wages because business demands are higher so labor will increase to meet the needs of the growing economy. So as GDP increases, employment usually increases as well. When GDP outdoes market expectations, the value of the currency rises. If the GDP falls, currency value falls.

The Consumer Price Index is the most widely used inflation measurement. It gives insight into historical average prices paid by consumers for a basket of goods and services. Changes in the CPI are associated with the cost of living and changes show whether or not the same goods are costing more or less for consumers. Rapid increases in the CPI can cause inflationary fears because rising prices lead to the Central Bank raising interest rates. This can be seen in a negative light because it means that people will have less disposable income, causing reduced spending, which will decrease inflationary pressure. An increase in interest rates can increase the value of a currency, but can also negatively affect the stock market in the short term because investors may choose to hold their money to earn interest, rather than investing it.

For most developed economies, like the US, inflation has been at historically low levels for the past decade. In addition to the fear over rising prices, in some economies, there is also fear of deflation, like Japan. When there is deflation, prices fall and assets lose value. Central banks strive to achieve a “healthy” inflation rate, generally 2-3% per year. 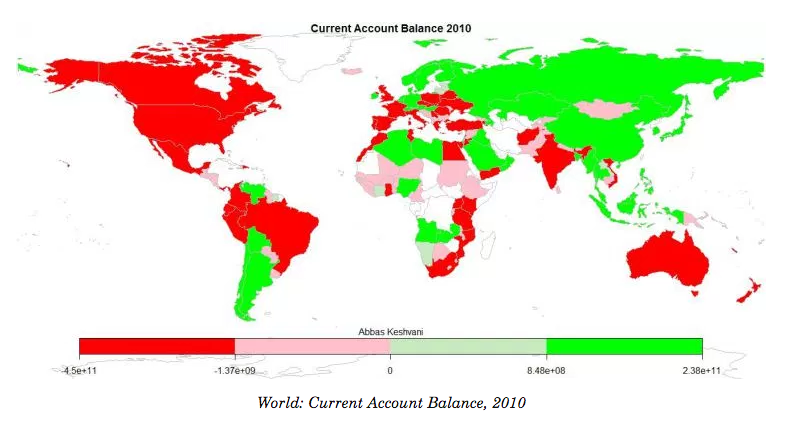 The Current Accounts Balance is the broadest measure of US transaction with the rest of the world. It measures US trade in goods and services and includes income from investments overseas and payments to overseas entities. A positive value indicates that the flow of capital coming in exceeds the capital leaving the country. A negative value means that more money is leaving the country than coming in. Long-term deficits can hurt the dollar and impact the likelihood of future interest rate hikes. The Current Account Balance for the US has historically been negative, meaning we import more than we export. 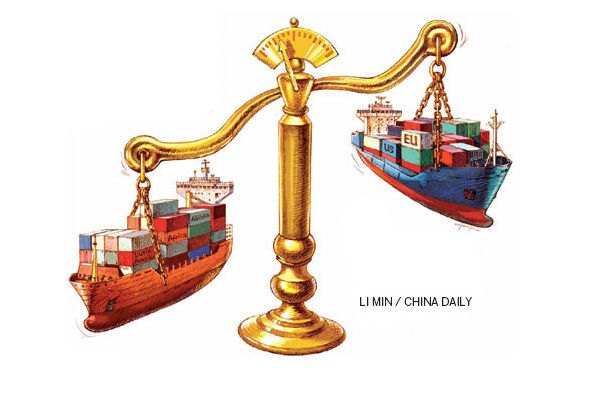 The Trade Balance is simply the difference between US imports and exports. This can be used to gauge the health of the US economy and provides information on the country’s relationship with other countries around the world. A positive balance indicates a trade surplus, while a negative balance means there is a trade deficit. Export demand and currency are linked because foreigners must buy the domestic currency to pay for the nation’s exports. If there is a trade deficit for an extended period of time, there is downward pressure on the dollar. A falling or static trade balance makes investors happy because it means that exports are on the rise and companies that export are selling more of their products and increasing revenue. 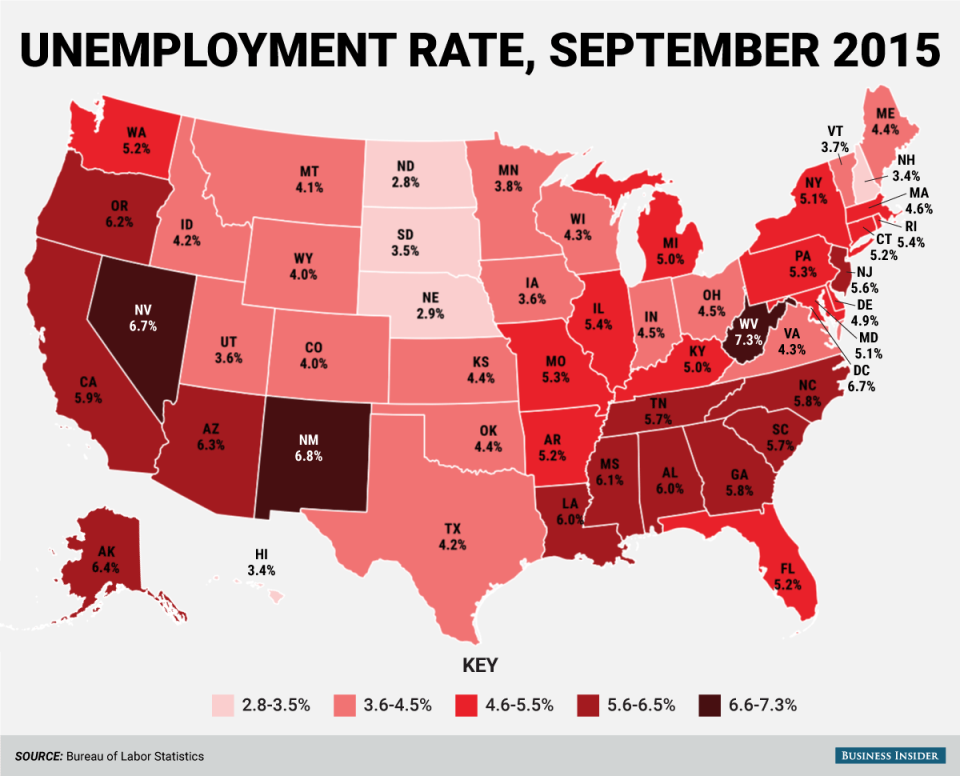 The unemployment rate can indicate the health of an economy. The unemployment rate is measured by the number of individuals who filed for unemployment insurance for the first time during the past week. This is because claim filings turn into unemployed workers. The number of unemployed people is important because consumer health is highly correlated with labor market conditions. If unemployment claims increase, it’s very likely that the stock market and US dollar will fall in value. On the other hand, higher employment leads to rising interest rates because the central bank aims to balance inflation with growth. Lastly, employment is important because it goes hand in hand with GDP. If unemployment is low, that signals a healthy economy and increasing wages because labor demand will grow to meet the growing economy.

Retail sales represent the total durable and nondurable goods sold to customers. This is a good measure of overall economic strength and is a leading indicator of GDP. It includes sales made by both large chain stores and local stores. It does NOT include services. This measurement becomes more relevant during Christmas time because the sector makes a large percentage of its money during that period. Strong retail sales are good for the stock market and US dollar. It is also used as a predictor of inflationary pressure. If retail sales growth is stalled or slowing, it means consumers have reduced their spending, which could signal a recession.

The purchasing managers index is a survey of corporate purchasing managers on the state of the industry as they see it. This is the industry where recessions tend to begin and end, and for this reason, the PMI is closely watched. It is also monitored because it sets the tone for the upcoming and for other indicator releases. For example, if the manufacturing industry is expanding, the general economy should be going well, and it’s a good indicator of future GDP levels. Accelerating manufacturing output, on the other hand, can be negative because it will strain capacity and push producer price inflation higher.

Non-farm payrolls are intended to represent the total number of paid US workers excluding general government employees, private household employees, farm employees, and employees of non-profits. This sect of workers accounts for 80% of the US GDP. Job creation is a leading indicator of consumer spending, which constitutes a majority of overall economic activity. Strong employment leads to rising interest rates and dollar values, while weak employment leads to those figures falling. Strong payroll figures can provide stock markets with a boost, as they signal that the economy is recovering.

The Industrial Production Report measures the changes in output in the industrial sector. It includes the manufacturing, mining, and utility industries, which only make up a small portion of the GDP. Industrial output data calculates capacity utilization ratios for various businesses and is used as a coincidence indicator. These calculations are highly sensitive to interest rates and consumer demand. The Industrial Production Report is a tool that is used for forecasting future GDP and economic performance and is used by central banks to measure inflation. High levels of industrial production can lead to uncontrolled levels of consumption and rapid inflation. Acceleration of growth in production is good for the US dollar, and it can put upward pressure on interest rates. 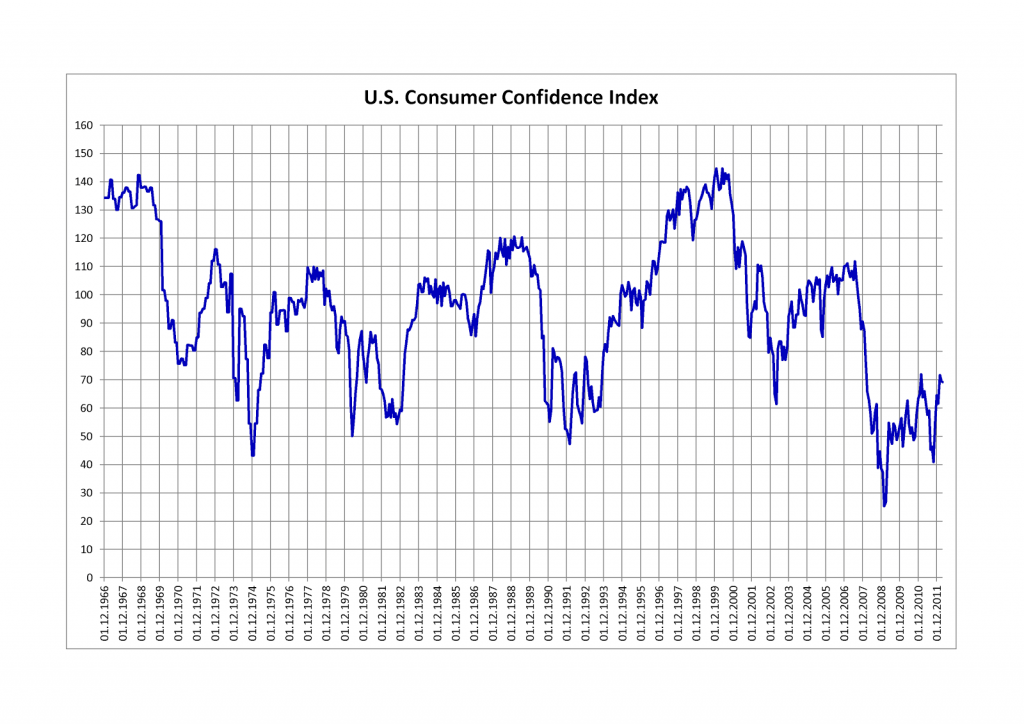 The Consumer Confidence Index is an indicator, formed from survey results, that gauges the relative financial health, spending power, and the overall confidence of the American consumer. There are three separate parts: consumer sentiment, current economic conditions, and index of consumer expectations. They measure how consumers currently feel, how the general economy is going, and how consumers feel the economy will look in six months, respectively. A strong consumer confidence report can move markets quickly because an optimistic consumer is more likely to spend more, which makes the domestic economy stronger. A stronger economy then leads to a stronger dollar. The CCI is highly subjective, which becomes an issue when people grab onto a small state of affairs and then use that as a basis for their view of overall economic conditions. 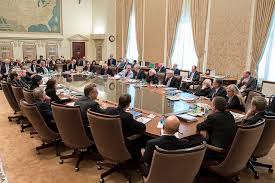 Each month, the Federal Open Market Committee meets to set interest rates and to give its opinion on current economic conditions, as well as the effectiveness of monetary policy. The purpose of this meeting is to look at future expectations of economic conditions and monetary policy. There are two types of members in the committee. “Hawkish” members want to increase rates, while “Dovish” members want to lower rates. The statement released by the committee is looked at by traders and used for clues as to how the central bank will behave in the future. As a result, the FOMC meetings cause huge market volatility. These meetings are where we learn about any changes in monetary policy. 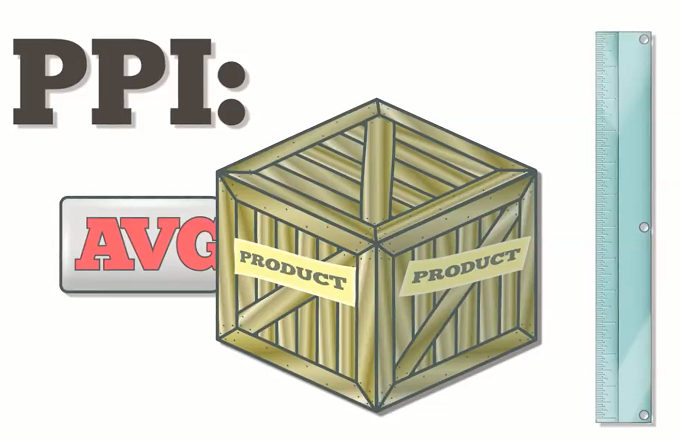 The producer price index looks at the average price change of factory-produced goods from the perspective of both the buyer and seller. It focuses on three areas of production: industry-based, commodity-based, and commodity-based final demand-intermediate demand. This goods-only index does not include transportation, wholesaling or retailing costs in the service sector, instead, it looks at industries like mining, manufacturing, agriculture, natural gas, and construction. However, it is a leading indicator of consumer inflation because when producers charge more for goods and services, consumers pay more. Rapid increases in PPI are inflationary and can depress bond prices and increase long-term interest rates. Unfortunately, the effect on the US dollar and stocks is unclear.